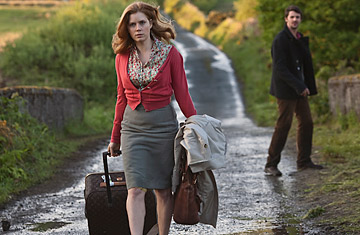 In the film Leap Year, the main character Anna (played by Amy Adams) is a complete control freak. Toward the end of the film, Declan, Anna’s love interest, says to her, “Why don’t you stop trying to control everything in the known universe? It’s dinner. Have a little faith that it will all work out.”

“I’ve heard that one before,” says Anna.

She then launches into the reason why she’s the way she is: because her father couldn’t hold a job, which led to constant financial instability—including her family home getting repossessed. When Declan responds to this information with genuine compassion, one detects in Anna a moment of vulnerability. But then she resumes her controlling ways.

All of us suffered disappointments in our youth, and the result for many women is to be on their guard. If you’re a child of divorce, for instance, you learned that love is fleeting and that people don’t keep their promises. If you’re the child of an alcoholic, or if there was high conflict in your home, you don’t really know what it means to be emotionally safe. If one or both of your parents was physically or emotionally unavailable, you learned not to expect much from others.

Or if, like Anna in Leap Year, you grew up in a home where money was a constant source of strife, you probably became determined to make your own way and to never depend on a man.

People who need to control their environment, as well as the people in it, live in a state of fear. This is far more common in women than in men since women are, by nature, more vulnerable. They are the sex that gets pregnant and thus know instinctively that the ability to depend on a man at some point will be crucial.

Are you a control freak? Here’s a great quiz you can take to find out. If the answer is yes, the next question might be: So what’s wrong with that?

Nothing—if you live alone. But if you want to be successfully married, or find lasting love, being controlling won’t get you there. To have love in your life, you have to surrender control.

I know it can be done because I did it. There are so many ways I used to be controlling, though I never thought of it as such. I used to tell my husband how to drive, for one thing. Or when he’d talk to me about problems at work I would tell him how to handle things rather than just be a supportive listener.

I also used talk on my husband’s behalf because he has a tendency to ramble. He’ll start off great, but sometimes he veers down a different path and winds up in a ditch. (He admits this!) When he’s finished talking, people will sometimes get a look on their face that says, “What did he just say?” It was embarrassing, so I’d jump in to “help.”

But help in women’s language is controlling in men’s language. While I was trying to help my husband get his point across, and may have been successful in doing so, I was also creating a rift between us.

Eventually, I learned to keep my mouth shut because I choose peace in my relationship over worrying about whether other people can understand my husband or not. That’s his problem, not mine.

A great way to determine if you’re controlling is to ask yourself if your relationship feels competitive rather than complementary. Is there a lot of needless bickering or a desire to be right? If so, the only option you have as a wife, the only genuine control you do have to improve your marriage, is to change yourself.

At the heart of your need to control is fear, or an inability to trust. You must learn to trust if you’re going to establish a better relationship with your husband. There’s no other way.

To be sure, this has never been harder for women to do. Not only do they have their own personal demons, they’ve been raised in a culture that teaches women to be distrustful of men. But that doesn’t mean it can’t be done. It can.

So decide today, right now, to face your fears. What are you afraid of that makes you feel the need to take control? What happened in your past that made you skeptical of love? If you’re in danger of being hurt, that’s one thing. But unfounded fear, or fear that’s not a result of anything your husband has done, undermines love. No relationship can last if one person is mentally preparing him or herself to get burned by the other.

Then sit back and watch what happens. And let me hear from you afterward. 🙂