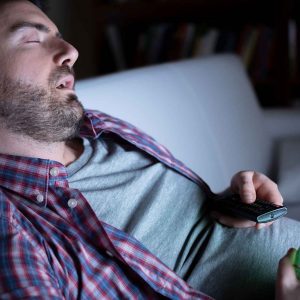 There was a time, not long ago, when few woman would consider marrying a man who lacked ambition. Not the kind of unbridled ambition that fosters deep pockets—the kind that propels a man to push forward for the sake of his family, as well as for his own mental health.

Men need work in a way women do not, but you wouldn’t know this from looking at men today. Younger men can’t seem to find their way, and many older men have given up.

We are awash is an epidemic of unmotivated men.

There’s a connection with this and with the fact that women now comprise the majority of the U.S. workforce. “The [jobs] report strongly suggests that the labor market dynamics are tilting in the direction of women,” said Joe Brusuelas, chief economist at RSM US. “We often look for tangible evidence of change. It is now here in the data.”

Some will cheer this phenomenon as a boon for women and for society, but it is anything but. When men dominate the workforce, there’s no negative effect on marriage and family formation. But unemployed and underemployed men have 0% chance of finding a wife.

We envision ourselves progressive when it comes to women and work, but women are still (and always will be) the sex that gets pregnant. And as such, they know that if they want to have children—and if they want the option of taking care of those children, if only for a few years—they need a competent working husband on whom they can rely. Women also aren’t attracted to men who lack ambition or drive. A man doesn’t need to be rich, but he needs to know where he’s going and how he’s going to get there.

We cannot reverse the sexes in this scenario and end up with the same result. A woman’s employment status determines zero of her attractiveness. The average man isn’t looking for a woman who can support him (nor is his desire for her related to her level of ambition), so his attachment to work is very different from a woman’s. Work is a man’s identity, his means of being useful. That is why, until recently, men have always placed work at the center of their life goals.

To be clear, this is not an argument against women being in the workforce at all. It is merely to acknowledge that men and women aren’t interchangeable. Thus, the outcomes will be different when we act as though they are.

Men have an innate desire to protect and to provide for their families, but most women (unless they’re single mothers) work for different reasons: for autonomy, for extra income, or because they believe that without work, they aren’t valuable. (Not true, but we can thank feminists for that message.) Whatever the reason, it’s not because they have a desire to support a husband.

“Gen X here, and I can say that I have worked my entire adult life, full-time and through college, supported my unemployed husband when he was out of work and currently earn more than he does. AND I HATE IT. Bitter is not a strong enough word for how I feel,” writes Karen in a comment on the Wall Street Journal article above.

Imagine a husband writing that: “Gen X here, and I can say that I have worked my entire adult life, full-time and through college, supported my unemployed wife when she was out of work and currently earn more than she does. AND I HATE IT. Bitter is not a strong enough word for how I feel.”

Just typing it feels silly—it is a rare man who would say such a thing. Karen, on the other hand, is not unusual. It is a rare woman who works full-time and year-round for years and years and doesn’t burn out or become resentful, particularly if she has children or wants children.

“The baby question is just one part of the early-30s milieu. There’s a distinct loss of ambition,” writes Bridie Jabour in “The millennials at 31: welcome to the age of misery.”

There’s a distinct loss of ambition for women. Men can burn out too, of course; but they don’t typically fantasize about dropping out of the workforce or being unemployed. On the contrary, men are lost when they’re not working. Male suicide has risen sharply, and much of it is due to unemployment or underemployment.

At the end of the day, nothing good will come from men being displaced by women in the workforce. This phenomenon has, and will continue to, create a sharp decline in marriage and family formation and will increase the likelihood of divorce and even death.