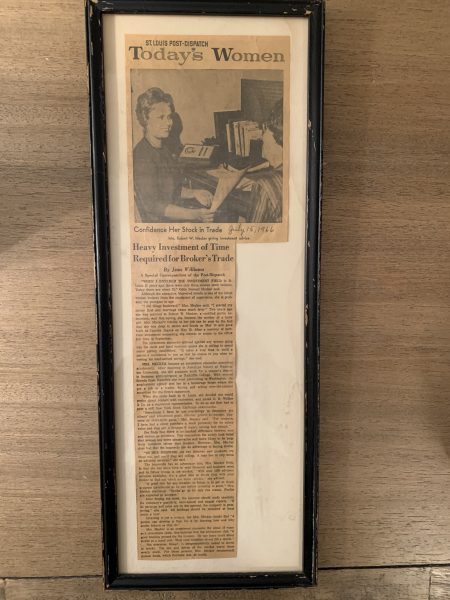 “I did things backward. I started my career first, and marriage came much later.” Those are the words of my then 36-year-old mother in a 1966 article in The St. Louis Post Dispatch about her career as a stockbroker. After graduating from Washington University in St. Louis, where she was born in 1930, my mother got her M.B.A. at Radcliffe, a  women’s liberal arts college that functioned as the female coordinate institution for Harvard. She then went on to work in New York City and Washington D.C. before moving home to St. Louis.

During that time, my mother had many “beaus,” as they were called then. Sometimes several at once! Women could do that in those days since they were actually dating, as opposed to having sex with, said men. She had several marriage proposals, too, but turned them down.

At 34, my mother married my father. She had my sister at 36, me at 38, and two miscarriages in between. She kept working throughout her pregnancies and afterward, the way women do today, and didn’t quit until my sister and I were 5 and 3, respectively. She never returned to the workforce after that.

You might assume that since my mother was what feminists would call a “trailblazer” that she would encourage me to follow in her footsteps and make the pursuit of a career my priority. She did not do that. Rather, I grew up hearing three specific messages growing up. One, you cannot ‘have it all’ at once. Two, babies need their mothers. And three, it’s actually easier to have kids first and a career later.

Unfortunately, the advice many women my age (and younger) heard from their mothers was the exact opposite of what my mother told me. They were told to “never depend on a man,” to focus exclusively on career and worry about marriage later—what to do in the meantime when it comes to sex and relationships goes unmentioned—and to become a mother later in life, after their careers have been established. That a woman’s biological clock winds down at the very moment her career hits its peak goes unmentioned as well.

In other words, there are countless loopholes in the narrative modern women have absorbed, which is why they’re way overdue for a new one. One that takes into account the realities of life, rather than some utopian version of what life should be but isn’t. One that accepts that some things in life, such as biology and human nature and the overwhelming needs of children, don’t change.

To that end, here are 4 reasons for women to once again make marriage their #1 goal: