Chivalry is dead because women killed it

* The following article was published at Fox News yesterday. I will be on Fox & Friends tomorrow morning (Wed.) to discuss… 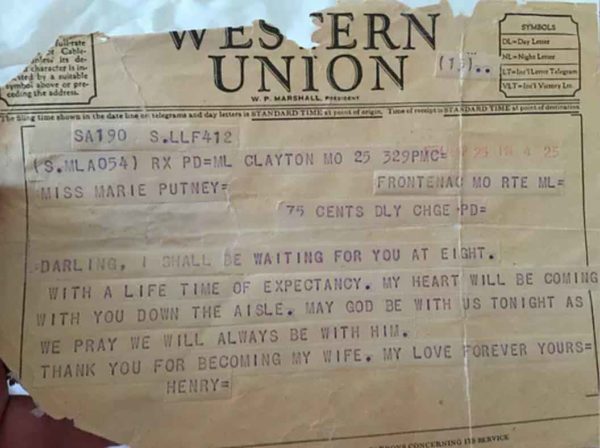 A friend of mine whose mother died recently was going through her parents’ memorabilia and unearthed a Western Union telegram from 1954 that her father sent her mother just before they married. Here’s what it said:

Darling, I shall be waiting for you at eight. With a lifetime of expectancy. My heart will be coming with you down the aisle. May God be with us tonight as we pray we will always be with Him. Thank you for becoming my wife. My love forever yours, Henry

Several days after I’d read this note, I came across this miserable tripe on Facebook: “Chivalry is harmful to both men and women,” relays the woman in the video. “because it reinforces this idea that women need to be helped or saved by a stronger man. And it takes away a woman’s agency.”

The video is part of an “Unpopular Opinion” series on Facebook, a concept that in theory I’d support. But there’s nothing unpopular about a video that sells the same tired message feminists have sold for years and subsequently became the status quo: that men and women are “equal” and should therefore be treated the same.

Women can open their own doors, pull out their own chairs and take care of themselves, women have argued for years. “I’m strong enough to do all these things,” notes the anonymous woman in the video, as she flexes her arm muscles to viewers.

“And what’s the deal with guys giving up their seats on the subway?” she adds. “If you do give me your seat, and I take it, I don’t have to talk to you. Please don’t talk to me, okay? I got like 20 podcasts loaded on my iPod that I would rather listen to than you. That’s not meant to be mean. I just don’t want to talk to you.”

If there’s one common theme in the media today about the relationship between women and men, it’s the claim that there are no good (read: marriageable) men left. Well, gee, I wonder why that is?

It’s clear as day why that is. The relentless message from women and society that men have nothing special to offer—that not only is their income unnecessary, so is their chivalrous behavior—has built a wall between the sexes the size of Mount Everest.

Funny thing, though, the equality meme hasn’t translated to women paying for their own dinner or asking men to marry them. Why is that? Could it be that deep down, women know something’s lost when men and women are viewed as the same? Could it be there was something special about men being men and women being women?

In the days when men were chivalrous, women held a different kind of power than they do today. Feminine power is far more potent than the power a woman gleans in the marketplace. But women don’t access it. And they reject masculinity as well. Today’s universities are in fact offering programs specifically designed to quash male nature.

And still women wonder why there are no more Henrys. Mature, respectful, marriage-minded men like him have vanished. Can we blame them?

Fortunately, as I wrote back in 2012, women have the power to turn it all around—because they are the relationship navigators. Men only changed because women did. That’s because men are born to please women. Modern woman don’t know this, for they’ve been conditioned to think of men as oppressors. But it’s true.

Any woman who wants what Henry and his wife had—and who wouldn’t?—can have it. It will take time because women have made a real mess of things. Nevertheless, they can begin by rejecting the narrative in this video. Instead, embrace chivalry. Praise chivalry. Praise men, for God’s sake!

And then watch what happens.