How Not to Wind Up with the Wrong Woman 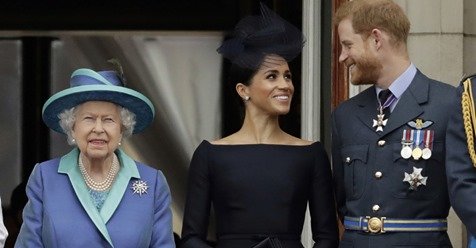 There are many traps people can land in when they “fall in love.” We talk freely and openly about women falling for the wrong guy—as if this were the normal way of things—but we’re not so comfortable talking about men who fall for the wrong woman. Yet it happens all the time.

Indeed, there’s a specific relationship dynamic in which many men today find themselves. They meet a woman who’s smart, who’s opinionated, and who knows her own mind. Perhaps she’s elusive yet intriguing, or maybe she’s gregarious and unrestrained. Either which way, he’s besotted.

But all too often, beneath the exterior of this seemingly confident woman lies fear and mistrust that translates to her need for control. It isn’t always obvious at first, at least not to the guy. But ever so slowly, over time, his needs get tabled; and eventually, he forgets what he wants or who he is. She’s fully in charge now.

Meghan Markle isn’t the first woman to lead her man in the direction she wants him to go. In response to her and Prince Harry’s split from the Royal family and subsequent rebuke of Queen Elizabeth, Piers Morgan tweeted,

“The staggering disrespect these two keep showing to the Queen is outrageous. Who do they think they are?”

But there is no “they,” really. While Prince Harry claims he’s as woke as his wife and thus wants what she wants, the break with his family would not have happened were it not for Meghan. Prince Harry would not walk away from his family and his life on his own volition, nor would he show his family such disrespect. That’s all Meghan.

Which is not to let Prince Harry off the hook—he’s fully capable of making his own decisions. It is only to say that a nice guy can lose his way in the arms of the wrong woman.

Still, this article isn’t about the royal (or now un-royal) couple, whose circumstances are different from the rest of ours. It’s about women who take control of everything and everyone, and the men who let them—which can happen for a number of different reasons.

Perhaps the woman is a product of divorce. Perhaps she had a bad relationship with her father. Perhaps she couldn’t depend on her father, or her mother taught her to never trust men. Perhaps she’s a feminist and thus feels women are inherently oppressed. Any one of these circumstances will cause her to not trust love. And people who can’t trust others compensate by taking control.

Over time, this control can escalate. In some cases it can become abusive, but mostly is translates to a woman being the dominant partner, while her husband merely goes along for the ride. Either which way, he lives more as an appendage to her as opposed to being his own man.

How can a man avoid this fate?

Begin by taking a good, hard look at yourself. Are you a people pleaser? A yes man? Do you hate to rock the boat but happily hide behind those who do? Do you believe Western women are oppressed and that it’s your job to take a step back so they can shine?

These are the traits that attract a woman who ultimately seeks control. It’s not something she purposefully or even knowingly does; it’s the polarity she seeks to retain control. She doesn’t want to be with someone like herself because then she won’t get what she wants; she’ll have to compromise. For this kind of woman (or person—men can certainly be controlling, too), the world revolves around her ideas, her needs, and her plans. To be successful, she needs a man who’ll give in.

Don’t be that man. If you do, you’ll become resentful and self-hating. You’ll become passive-aggressive in order to get your needs met, and that never works. Instead, work on becoming the strong, healthy man you were meant to be—one who isn’t afraid to own his masculine identity and who doesn’t allow other people to dictate his actions. Make sure you have yourself and your life in order, in other words, before you allow someone else into it.

If you’re able to do that, you’ll attract a different kind of woman: one who can’t control you and who wouldn’t even try.