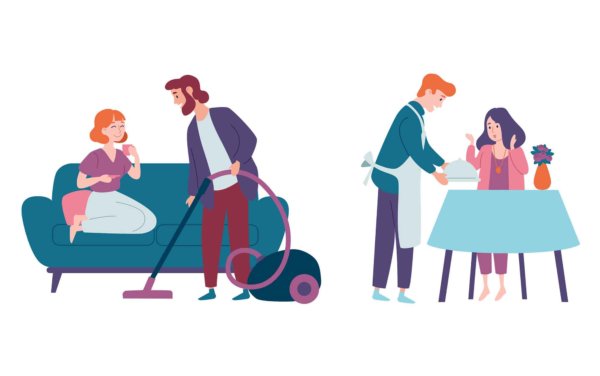 In my recent post, entitled “6 Ways Men Can Become Emasculation-Proof,” one of my suggestions to men was to not be overly accommodating toward their wives and girlfriends.

That may sound odd or even mean, but I’m not saying men shouldn’t be kind or shouldn’t pull their weight on the home front.

What I am saying is that because men have a natural desire to please the woman they love, it is common for men to unwittingly allow themselves to become too conciliatory and to ultimately “lose” themselves in the process.

The same might be said about women—being too nice or too conciliatory; but we never apply this principle to men—the assumption being, well, what exactly? That it’s okay if men lose their identities?

Here’s a great example of what I mean from a man named Jack who told me his story after reading my post:

When I got married, I gave my wife all the power and freedom I could because, in my mind, I thought this would ensure her happiness. I thought she would love me and shower me with grateful affection. I imagined she would respond with little thoughtful gestures of taking care of me.

Nothing could’ve been further from the truth.

We now live in a sexless marriage. She seems opposed to doing anything for me i.e. my laundry, my lunch or even having dinner ready. Our house is a disaster because I simply can’t clean up after a wife and two daughters every day after coming home from a full-time job. (Speaking of which, I was working a second part-time job to follow the Ramsey plan for almost three years only to fail and give up bc my wife wouldn’t commit to any budget we “agreed” upon.)

When I left my parents’ home, I was organized and disciplined. I was rock climbing, mountain biking, scuba diving and studying hard. I was a manly man with a solid plan. Today I don’t even recognize that guy. I feel like I don’t know anything.

Similar scenarios are common today since America is drowning in “empowered” women who’ve been groomed to put themselves first at all times. When men fall for a woman like this—and I would caution any man whose girlfriend considers herself “empowered” to run for the hills—it often isn’t until years later that her true stripes emerge. This is especially true once children come along.

To avoid ending up in Jack’s boat, begin by looking at what you learned growing up. Here’s what Jack wrote:

I grew up with a dominant mother. She used our fear of setting her off against us to secure absolute control. She “groomed” me into a little gentleman, paining myself to be attentive and as vigilant as possible. Some things were old-fashioned, like getting my sister’s door; but I was doing dishes, vacuuming, dusting, etc. while also having all the yard work and car care responsibilities. She dictated how I fixed my hair and how I trimmed my nails. She even tried to teach me how to shave once when it dawned on her that she’d better let dad handle that.

Men who grow with dominant mothers (and whose fathers, if they’re around, are weak in response) are particularly prone to becoming overly accommodating and thus not getting their needs met. They think if they please women, they will be showered with love and appreciation. But it rarely works that way.

No healthy woman wants to control her man. She may try to do so for various reasons of her own; but the more accommodating you are, the more your needs will get lost in the process.

If you’ve been with the same woman a long time and you think this might apply to you, ask yourself if before you met her were you on a clear path like Jack that got suddenly derailed. There’s your answer.

The second thing men can do after assessing why they act as they do with women is to follow the advice in my original post, “6 Ways Men Can Become Emasculation-Proof.” Even if you’ve already established an unhealthy dynamic with your wife or girlfriend, you can reverse it at any time. As another man wrote in response to my article,

“When push comes to shove, most women would rather deal with their angst from having submitted to a stronger man who they think is worthy of her as a prize than deal with living with a man who is beneath her but with her having more power in that relationship.”

That’s a hard pill to swallow. But it’s true.

So be the man you were before you married her. Don’t routinely change your own plans or curb your own needs and desires to accommodate hers. It should go both ways.

If it doesn’t, you have a problem.