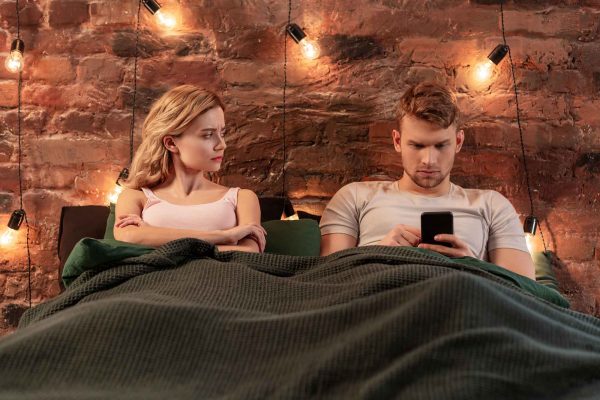 According to a new article from the BBC (and it isn’t the first on this subject), more and more millennials around the world are in sexless marriages.

The question is why.

As is often the case the case, the answers are varied. But at the core of it lies an overarching theme.

The most obvious “unprecedented” factor is stress. “Stress is one of the biggest libido killers,” notes Justin Lehmiller, “and millennials are a particularly stressed group in many ways, especially compared to Gen X.”

Here are three ways in which millennials’ lives are unique from every other generation in history.

And then there’s the biggest issue of all, which is also unprecedented.

Sex therapist Kimberly Anderson notes that the demographics of sexless marriages have changed since she started practicing thirty years ago. “Thirty years ago, a majority of the couples I treated for sexless marriage were 50-plus,” she says, struggling with decreased libido from the hormonal changes and illnesses that come with aging.

Today, most of the couples in sexless marriages Anderson sees are 45 and younger. “The underlying dynamics are quite different than they were/are with older couples,” she says.

Indeed they are. This is 100% what separates the average millennial couple from the average couple in every prior generation. In a nutshell, millennial couples consider themselves “equals,” as in the same. And in so doing, they’ve killed the natural sexual desire that would otherwise exist between them.

A strong sex life between a man and a woman is predicated on sexual difference, not sexual sameness. One is clearly masculine and the other is clearly feminine. (This is even true with same-sex couples.)

This doesn’t exist for the average millennial couple, who live more like roommates than they do like lovers. Millennials pride themselves on being mirror images of each other, or being interchangeable. Breadwinning and chores and childcare must be split down the middle—otherwise, in their minds, the relationship is unfair.

They also don’t combine finances. They consider each partner’s earnings and debt to be “his” or “hers” and as opposed to theirs.

All of this results in millennial couples living more like roommates than spouses. The sexual polarity that, in most cases, was there when the couple first got together, has vanished with their insistence on becoming sexual equals once married.

Simply put, millennials messed up. They conflated the concept of sexual equality with their value as human beings. Men and women have always been equals with respect to the unique value they bring to the table. Being equal in value does not require interchangeability. You can perform separate tasks and still be equal.

Men and women are equal in value, but they wildly different by nature. When you accentuate those differences, sparks fly. When you hide them, nothing happens.

It’s like two two ends of a battery. Put them together, there’s a chemical reaction. But if you put two of the same sides together, nothing.

The answer to this problem is actually easy; it’s just super hard for millennials to hear.  Emphasize and embrace sex differences, and the sparks will once again fly.

Naturally, this requires an understanding what it means to be masculine and feminine. We’ll save that for another day. First, we have to admit that sexual sameness is at the core of millennials’ sex problem.

I’m not sure we’re there yet.

Previous Post: « What if we want traditional gender roles in our marriage but can’t afford that lifestyle?
Next Post: For most women, there’s more to life than work »
Loading Comments...