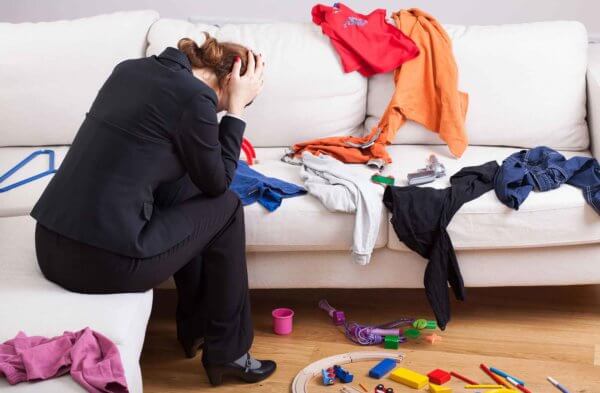 Last week, after an especially long day and an “epic” tantrum from her 3-year-old, Sarah Buckley Friedberg, a Massachusetts mother of three, posted on Facebook a mock ‘to-do list‘ that society expects of mothers today. The ending was inspired:

“I don’t know about you, but I’m ready to lean OUT. Thanks for coming to my Ted talk.”

Friedberg’s post went viral. But in just a few weeks most people will have forgotten about the article.

Don’t be one of those people. Instead, do as Friedberg suggests.

Reading Friedberg’s post took me back in time to the very first book I wrote, some 20 years ago now after the birth of my first child—before I’d had a second child and my writing for the subsequent five years amounted to whatever blog post I could squeak out when I wasn’t falling over drop dead from exhaustion.

It also reminded me of Tina, a mother of three children under six who’s profiled in my upcoming book, Women Who Win at Love. Every time I hear Tina talk about her life, my heart breaks because I know the reality looks nothing like the mirage.

Like most women her age, Tina absorbed the idea that “balancing” full-time work with young children is just what women do and must therefore be manageable.

Her chaotic life proves otherwise. Like most families in which both parents work full time and year-round, Tina and her husband live what can only be described as a rat race. For starters, every day they must decide who’s going to schedule their work life in such a way as to accommodate the children’s needs. That alone sounds exhausting.

Moreover, their children don’t wake up according to their own body clocks to a calm house and warm food on the stove. Instead, they’re awakened from their slumber, dressed as they’re half asleep, fed protein bars, and then shuttled from daycare to round-the-clock babysitters. And God forbid they get sick. Then all hell breaks loose.

None of Tina’s children sleep through the night and more often than not end up in their parents’ bed. Needless to say, Tina is utterly sleep deprived and as a result her sex life is non-existent—much more to her husband’s dismay than to hers. All she wants is sleep.

Finally, her son has behavioral problems. Unable to control him, Tina took him to a psychologist, whereupon he was immediately diagnosed with oppositional defiant disorder.

Tina’s son doesn’t have oppositional defiant disorder any more than her children have a sleep disorder. Her children are simply too young to express what they want and need—order, stability, Mommy—so they act out their pain instead.

The most recent book to explain this phenomenon is Being There, by psychoanalyst Erica Komisar. Gravely concerned about what modern women are trying to do—hint: too much—Komisar provides a roadmap for how women can structure their lives in such a way that they can enjoy their young children, and their children can get what they need.

Because that’s really the crux of the issue: children aren’t getting their needs met—and mothers, well, if they were brutally honest, would admit that motherhood is a nightmare.

Of course, motherhood has never been easy; but compared to today our own mothers’ experience was a walk in the park. Case in point: I recall a friend who told me how her working mom friends are stressed to the max trying to get dinner on the table every night. When she brought this to her mother’s attention, her mother reminded her that in her day, mothers weren’t responsible for working a full-time job in addition to getting dinner on the table. Getting a healthy dinner on the table was the job.

All of which is to say, the ‘to-do list’ Friedberg described is real. And it exists, whether modern women realize it or not, because for years feminists disparaged the work of motherhood and told women to leave their homes in search of greener pastures.

Only it turns out those pastures weren’t so green after all. And now many women who want to stay home now or in the future feel stuck, for they’ve created lives that demand two incomes because that’s what they’ve been encouraged to do. As one millennial mom wrote to me the other day,

“Raising children and attending to their constant needs takes up so much mental brain space and physical energy. There are times when my business needs attending, and when this happens while my child wants to play, I get a lump in my throat. The push and pull is relentless.”

This “push and pull” is the end result of what began as a full-scale attack on mothers and the subsequent promotion of daycare as a reasonable and harmless mother substitute.

Previously, mothers at home were considered vitally necessary to the health and well-being of children, families and society. But feminists insisted it was a waste of a life and that men had the better end of the deal. And women listened.

Ms. Friedberg’s post hit a nerve because millions of mothers just like her are looking for support to, as she put it, “lean OUT.” So here I am, shouting as loudly as I can:

Not only are you just as valuable without a job, women are manifestly different from men. In her article, Ms. Friedberg said more than once that her pediatrician husband does plenty at home in addition to his day job—but it is she who carries the “mental load.”

The reason women carry the mental load is simple: they’re women. Women are more intuitive by nature and are thus more emotionally responsive to children’s needs. They were literally once connected to their babies—how could they not have a visceral reaction?

“The ability to nurture is in our DNA as women. But it must be turned on by the environment,” writes Komisar.

Only it hasn’t been turned on by the environment. For decades women’s unique nature has been categorically denied, to the detriment of both women and children alike. Mothers belong with their children—there’s nothing more natural in the world. Which is why, when women ignore this truth, their lives become nothing but chaos.

Until we change course, the American family will continue its downward spiral. Tucker Carlson addressed this issue back in January but focused primarily on economics. It’s true we’ve created an economy that demands two incomes to maintain (particularly if you live on either coast), but we did it by insisting mothers couldn’t be happy at home and would be letting down the Sisterhood if they did. That message came first.

The economics came later. All the income growth in the US since 1970 has come from women working outside the home. That’s what raised the GDP, making it harder for families to live on one income.

And note the date: 1970. That’s when feminists began their push to get mothers out of the home and into the workforce. It was a calculated ideological and political move, and it worked.

Married mothers didn’t leave their homes en masse because they needed money; they left because they were pulled in that direction. People want to be be valued for the work they do, and the workforce was fast becoming the place to get it—for everyone. It was this loss of respect, this elitism really, that fueled the dual-income family.

So that’s where we begin, then, in turning things around. Yes, mothers who want to be home need practical solutions for how to make it work—how to live on less, how to use their time at home to everyone’s benefit, how to keep a toe in the professional waters, etc.—but first they need respect.

They need cultural support to stop running around like chickens with their heads cut off so they can enjoy motherhood and understand that raising one’s children is crucial to the health of their families and our nation.

Until we get that across, the rest is just fluff.

Yes, Gender Equality = Family Breakdown
Next Post: What if you don’t find yourself unTIL you get married?