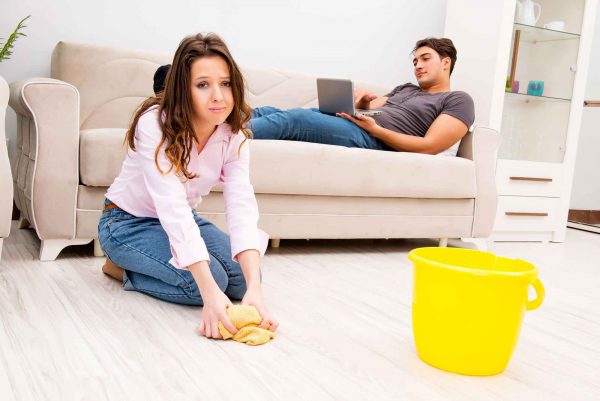 Perhaps, like me, you’ve read a lot lately about husband and wives and housework — such as here, and here, and here. Naturally, all the articles are written by women. Naturally, they all lament the same thing: Wives do more housework than husbands do. This is true, apparently, even for full-time breadwinning wives.

One such wife works from home and thus ends up doing more on the home front because, well, she’s there. But she’s still convinced this is unfair. Her solution? To start charging her husband for every hour of housework she performs above and beyond what he performs. (Funny, my husband works from home while I’m the one who rents an office, and as a result he ends up doing more laundry and dishes than I do. I’ve never once heard him complain.)

We hear a great deal in the culture about how unfair it is that women take on the equivalent of two full-time jobs, the one outside the home and the one inside, while men don’t have this same burden. One of the arguments you’ll hear has to do with what’s called cognitive labor. Eve Rodsky writes in the Wall Street Journal:

A study by Harvard researchers published this year in the American Sociological Review found that women reported doing more ‘cognitive labor’ at home than their spouses did—such as anticipating needs (the kids prefer mustard to ketchup on their hot dogs), monitoring progress (are we running low on mustard?), identifying options (is the grocery store still open?) and making decisions (Dijon or yellow?). Men often don’t see or value this sort of invisible work until they start to do it themselves.

This is unquestionably true. But the only reason women are resentful of this is because they have false expectations of men and marriage based on the lie they were told that the sexes are the same or interchangeable. Countless couples are struggling needlessly in their marriage due to the lie they’ve been fed that a good marriage is a union of “equals.” Not “equals” as in a partnership, the way we might think of it, but equals as in interchangeable: as though husbands and wives can, and should, perform the exact same tasks with equal fervor and with identical results.

What an absurd expectation! Men and women are vastly different by nature, and these differences become glaring once children come along. Men father, and women mother. Those are verbs, and each has a different definition. For example, mothers are more likely to comfort a child who falls, while fathers are more likely to help the child dust himself off, get up, and try again.

The discrepancy is no different with housework. A husband won’t typically “see” the things that need to be done at home in the same way his wife will because men’s and women’s brains are different. Men just don’t think the same way women do.

Men tend to focus on one thing at a time and thus don’t notice things that orbit around that singular task, whatever it is. Their brains are wired to put all their attention on accomplishing one thing, and men will discount everything else that isn’t relevant to that task. This is the complete opposite of the female brain, which tends to focus on everything being “just so” or on managing many things at once. Women are inherently more sensitive to and concerned about the details of housework and child care than men are.

It’s no one’s fault. It’s just the way we’re made.

Women either want to, or feel compelled to, manage the home front, even if they work outside of it. If you look at the chart in this recent finding by Pew Research Center, you’ll notice a whopping chasm between women and men when it comes to grocery shopping and meal preparation. 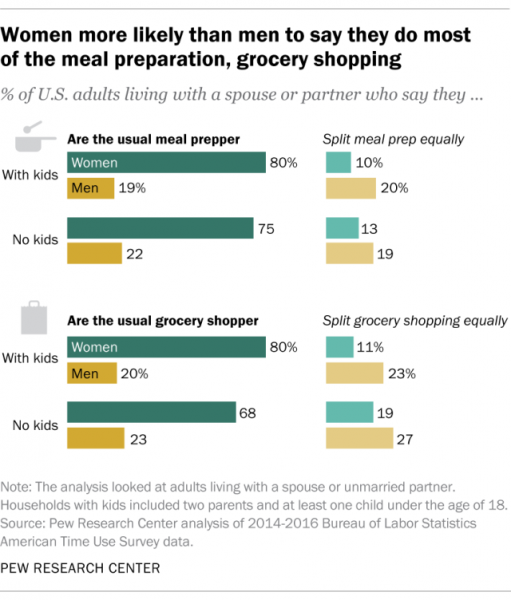 The problem, in other words, isn’t husbands. The problem is that women don’t realize how different men and women are until they’re knee-deep in the work-family juggle. They assume breadwinning and child care will be handled, and should be handled, as though husbands and wives are clones of one another, as if neither sex has any unique proclivities at all.

The wake-up call is thus loud and intrusive. To realize that women can’t become breadwinners and at the same time shed their emotional ties to the home and the children is scary. No one told them this would happen, so naturally they blame husbands who, as it is, spend triple the amount of time on child care than they did in 1965 and roughly six hours more per week on household chores. That’s in addition to working far more hours in the marketplace than married mothers do.

The pursuit of sexual equality will always result in husbands and wives competing with one another, which in turn results in unnecessary conflict. The answer to this problem is to shift completely our understanding of women and men. Simply put, they are equal in value but different by nature. Men and women will never be interchangeable, nor should they be. It is our differences, our complementary natures, that makes marriage work.

Work within that framework, and your relationship will cease to be a war zone.