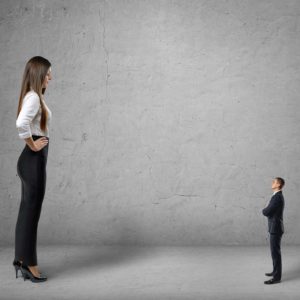 This article was originally published at The Federalist.

Susan Forray is a 44-year-old divorced actuary who wrote in The New York Times about her relationship with a man unlike all the others she dated in the past, in that he believed in traditional gender roles. This gentleman told Forray flat-out one day, “I’m the man. I should be in charge of the money.”

Forray felt a “jolt of anxiety.” Here she was, an actuary—someone who analyzes statistics and uses them to calculate insurance risks and premiums—and the man she’s dating tells her managing money is his job, not hers.

“I found his bluntness surprising but also alluring. He was confident in his desires…I craved a man who sought to take financial responsibility for his family, even if I didn’t need it,” she writes.

“The men I’d previously dated thought of themselves as staunch feminists—in hindsight, frustratingly so, at least in the sense that they were too inclined to defer to me (under the guise of respecting me) to ever take charge, either financially or sexually.”

This sexual dynamic Forray describes is not an anomaly—it is the norm. I’ve heard countless stories of strong and successful women who are dating or married to a man who, in an effort to appear liberated, has either curbed his ambitions or simply follows rather than leads.

Just the other day I had yet another conversation with a mother whose 20-something daughter is moving in with a man who lacks the direction and ambition she has, and the daughter told her mother she’s worried he will come to resent her. She’s right to be worried. That will happen.

I know I’m not alone in recognizing the seismic shift that has occurred since I was on the dating market, but my experience with this phenomenon isn’t relegated to conversations with friends. As an author, speaker, and relationship coach, I deal with this new reality every day.

The vast majority of my clients are individuals and couples who are grappling with a new sexual dynamic: one in which the woman, not the man, is the dominant partner.

You might think this would make women happy. In fact, it makes them miserable.

How Men Lost Their Mojo

It makes men miserable, too. But 40 years of feminism has eroded male power to such a degree men no longer recognize their disempowerment, which starts in their very own homes.

Today, almost a quarter of U.S. children live in single-parent homes. In the vast majority of those homes, the single parent is the mother. This is detrimental to both sons and daughters, but it is particularly devastating for boys.

After all, girls still have their same-sex parent as a model for womanhood; but boys have no such model for manhood. Instead, they’re raised primarily by women—not just at home but at school, where the majority of their teachers are women.

This dearth of fathers and of male leadership, combined with a relentless war on men and masculinity, has emasculated our men. They’ve dispensed with their masculine attributes (or never developed them to being with) and are now feminized.

Naturally, this radically alters the sexual dynamic between women and men. Rather than being bold, confident, strong, and ambitious, men are tentative and accommodating. They look to women for answers and await their instructions. And far too many have stopped making something of themselves.

The Significance of Sex Roles

As a result, women don’t want them, and men don’t understand why. After all, they’ve become the liberated men they were asked to become. But in doing so, something was lost.

It’s one thing to encourage people to be flexible with sex roles and another to suggest biology is bogus. Men and women are not interchangeable. Ergo, the idea that they can seamlessly reverse roles is wishful thinking.

It is true the average marriage today, my own included, is more egalitarian than were our parents’ and grandparents’ marriages. Birth control, technological advances, remote work spaces, and a shocking array of household conveniences made this inevitable.

But when couples become parents something happens: they begin to divvy up tasks according to their biological proclivities. Indeed, a mere 32 percent of married women prefer to work full-time when they have kids—the rest want to work part time or not at all. This is not the case for men, who view breadwinning very differently than women do.

Take a moment to consider the most significant difference between the sexes. It is women whose bodies have the ability to do the most important and powerful task in the world: carry life, give life, and nourish life. Women are even designed to nurture their babies in a unique and primal way. A woman’s value to society, in other words, is immeasurable, even if she never earns a dime in the workforce. That is not the case for men.

A woman’s identity is linked to her desire to “nest.” That this is not true of every woman does not make it any less true for most. Any gynecologist can tell you that most women, if they haven’t had children by their mid-thirties, become anxious. No matter how committed they may be to their jobs, that desire is there. When it’s met, a woman’s nurturing gene kicks in. Providing for that child emotionally, not financially, will be her first instinct.

A man’s first instinct is to make money. That’s his unparalleled accomplishment in the same way giving birth is to a woman. Ergo, when a man isn’t providing for his family in a manner he deems necessary, he will not be happy.

Neither, apparently, will she. As Forray observed, women “crave” a man who takes financial responsibility for his family, even if they don’t technically need him to. Sexual attraction depends on a woman’s ability to rely on a man, even if she’s capable of relying on herself. It’s not about what a woman can do but what she wants to do. It’s about desire.

That’s the missing element in the push for the so-called equal marriage. By suggesting men and women are essentially the same, we set them up to fail. We ignore biological reality at our own peril.

When She Makes More

Relationships are especially fragile when the woman earns more than the man. When that happens, the relationship feels parental rather than sexual.

“According to psychologists (and divorce lawyers) who see couples struggling with such changes,” writes Ralph Gardner, Jr. in New York Magazine, “many relationships follow the same pattern. First, the wife starts to lose respect for her husband, then he begins to feel emasculated, and then sex dwindles to a full stop.”

Now you might be thinking you know plenty of couples who have no problem with this arrangement, and that may be. Many couples don’t anticipate in advance how it can backfire. But studies have shown, and psychologists can attest, that when the wife earns more, marriages on average are far less stable. This is especially true if the husband is not employed at all.

Husbands may lament their long hours at work and want to spend more time at home, but they will not be burdened by it because it’s in their nature to provide. It’s their fuel.

For women, employment is more about autonomy or personal achievement or simply having added income. If and when her job becomes necessary for the family to survive—or worse, if her husband becomes her dependent—things fall apart. That’s why we hear so much from working mothers (and not from working fathers) about guilt and stress.

This is what happened to a couple I’ll call Jane and Bill, who’ve been married 21 years. Jane is a physician who makes $350,000 per year, and Bill (who has an MBA, so is clearly Jane’s professional equal) has been home with their four children since they were born. Neither is happy.

For decades women have been groomed to be like men, and men have responded by becoming more like women. This role reversal may get women ahead in the marketplace, but in love it’s a complete disaster.

Successful relationships depend on men being men and on women being women. Every fiber of a woman’s being calls out for a man with whom she can feel physically and emotionally safe, and money is part of that equation. Yes, women now earn their own money, and that is not going to change. But what can change is our attitude and approach to love.

Previous Post:Ep. 28: Yes, You Can and You Should Raise Your Sons and Daughters Differently
Next Post:Ep. 29: ‘Woke” Men Who’ve Fallen for Feminism
Loading Comments...