Sheryl Sandberg gives awful advice to women.
Follow it at your peril 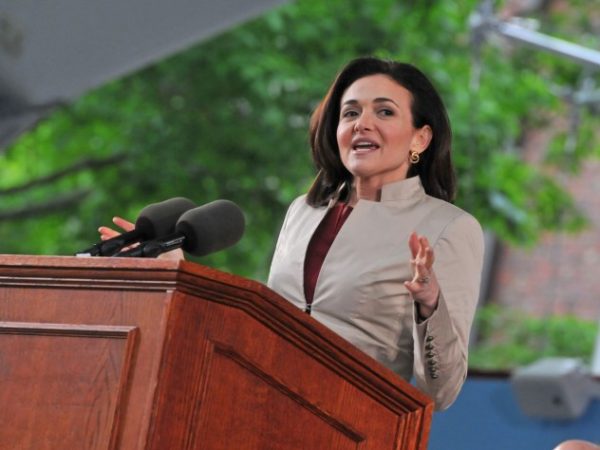 I can’t think of anyone whose advice to women is more destructive than Sheryl Sandberg’s.

From her considerable perch over the past ten years, Sandberg has told women to “lean in” to their careers at the expense of being with their children. She has insisted men and women live identical lives, as though there are no differences between them that dictate their disparate yet equally valuable choices.

And now she’s telling women to orchestrate their own marriage proposals, rather than waiting to be asked.

“It seems to me that many women take charge of their lives in every way except dating and marriage…They don’t hand the reins of their educations or careers to someone else, but they wait for their boyfriends to make this huge decision for them.”

Wait for their boyfriends to make this huge decision for them? Last time I checked, a marriage proposal is a request—not a demand.

It never ceases to amaze me how Sandberg can take a benign event—remember the #BanBossy campaign she launched as payback for being told she’s too bossy?—and wrap it up in a feminist bow to make women feel they’re backward for not choosing, as Sandberg does, to control everyone and everything in their midst.

There’s a perfectly good reason most women don’t approach their love lives the same way they do their professional lives. Those are two entirely separate domains that require a different set of skills. Indeed, any woman who follows Sandberg’s advice will almost certainly be calling me in ten years.

How do I know? Because almost 100% of my coaching clients are dealing with the same problem: they followed the advice of their feminist mothers and mentors—and have come to regret it. They viewed men and marriage through an equality lens and assumed the sexes are “equal,” as in the same. As though it doesn’t matter who does what because the sexes are ultimately interchangeable.

This bogus worldview fosters competition between women and men, rather than complementarity. And  the results are ugly. The women I coach have almost all been groomed to “never depend on a man,” to view femininity as weakness, to become their own providers and protectors, and to value career over marriage and family. Those who did get married chose soft men who willingly relinquished their masculine identity in order to let the women lead. As a result, their relationships are a disaster.

I’ve been married to my husband for 11 years and we have a 10-year-old son. I’m miserable in my marriage and have done years of research and reading to find answers about why marriage has been so unpleasant. How do I fix a marriage with a woke husband who I have come to believe wants me to take care of him financially? I look forward to connecting. Thank you!

Since my wife died, I’ve been on 10-12 dates, and every woman I meet is a control-freak feminist who wants to 1.) establish her dominance  2.) maintain control  3.) contend or argue on any issue. Could they be doing this because they’re massively insecure? Why date a woman who I wouldn’t want to get on an elevator with? The good news: I’m finding peace and joy in solitude these days.

These examples merely scratch the surface—I could fill endless pages with similar stories. As one client named Karie, who makes 400K a year while her husband stays home, wrote, “The feminist message is so strong. It is not good. It is not right.”

Of course it’s not right. Because not only is the equality meme false on its face—men and women are as different as night and day—the message is entirely self-serving. Sheryl Sandberg couldn’t care less about women’s happiness and well-being. She has an agenda, and that agenda demands women live their lives the way Sandberg lives hers. It’s the only way she can achieve her dream: “A truly equal world would be one where women ran half our countries and companies and men ran half our homes.”

But Sandberg’s chosen path represents a small fraction of the female population, as evidenced by feminists’ relentless complaint that there are too few women at the top. To rectify this supposed problem, they sell the bogus idea that living a life like Sandberg’s equates to empowerment.

In fact, there’s nothing empowering about suppressing the desire to make marriage and motherhood the center of one’s life, or even to date the traditional way, where the man is the pursuer and the woman, the prize—particularly for the sake of politics. Sheryl Sandberg may want more estrogen in the boardroom; but that’s for her benefit, not for yours.

Most women, by the time they’re in their mid- to late thirties, experience a shift in priorities and come to regret having romanticized and envied a man’s life. They realize the entire feminist premise is based on a lie.

Men and women may be equal in value, but they are wildly different by nature. Indeed, women who win at love do the exact opposite of what Sandberg suggests: they may “take the reigns” at work, but they let go of those reigns come 5 o’clock. At home, in their personal lives, they utilize a different kind of power.

Feminine power is the balance to masculine power. Men, as a rule, are hunters by nature and are therefore drawn to soft, nurturing women—not to bossy, domineering ones. And women, as a rule, are gatherers by nature. They’re relational beings who intuit and dream and empathize. And they’re naturally drawn to masculine men who know how to lead. Not dictate—lead. There’s a difference.

It isn’t sameness that makes a relationship work but the yin and yang of masculine and feminine power. Any woman who acts like a man by “taking the reigns,” as Sandberg suggests, will not attract a masculine man. She will attract the exact opposite kind of man: a soft male, or a “soy boy.” Over time, he will come to resent her, and she will lose whatever respect she once had for him—if she had any at all.

If you don’t believe me, I have countless clients who’d be happy to talk to you.