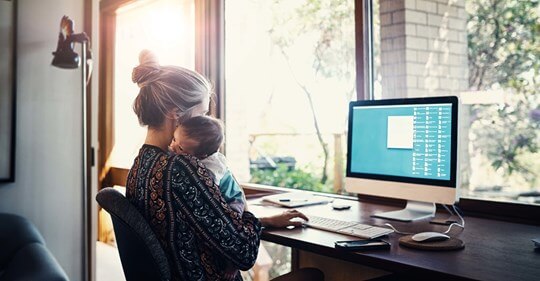 In my last post, I responded to the research on the “happiness penalty” faced by mothers who are the primary breadwinners in their families. The toll it takes to try and raise children while at the same time be the family’s main source of income is off the charts. I would expect the data to look exactly as it does.

The fallout of such a lifestyle is no doubt the reason 67% of all mothers say their ideal situation is to work part time or not at all. Even many full-time working mothers agree with that sentiment.

“Among mothers who currently work full time, many would rather not. About 44% say working part time would be their ideal situation,” writes Wendy Wang.

Given such overwhelming agreement about what women want with respect to work and family, why aren’t we helping women create lives that allow them to have what they want? The only role models young women have are mothers who run around like a chicken with their heads cut off, shortchanging both their jobs and their kids, and mothers who devote their entire lives to their families. (The latter is perfectly admirable, but it appears not to be what most women want.)

This is such an obvious solution to the work-family dilemma but one we rarely, if ever, hear about. Why? Because if women are encouraged to work part-time (or Heaven forbid, not at all) when they have kids, how can America achieve gender equality?

It can’t. And so, women don’t get the advice they need from their teachers or their mentors or their parents or the media. Mum’s the word on the real secret of work-life balance.

It’s time to tell that secret.

There’s even a name for it: “sequencing,” a term coined by Arlene Cardozo in her 1986 book of the same name. Sequencing refers to structuring one’s professional goals around the needs of one’s children and family, as opposed to the other way around.

As an example, for the past twenty years I’ve been home with my kids I have worked intermittently: some days I do, some days I don’t, and never until recently for an entire workday. I wrote when my children were asleep or in school or busy with their dad; and for a 5-year stretch when they were babies and toddlers, I pretty much dropped out of sight—save for some occasional blogging. Now that my daughter is in college and my son drives, I work full time. The last time I worked full time I was 31. I’m now 51.

Some other examples: I have a sister-in-law who’s a licensed clinical social worker/psychotherapist and the mother of four grown boys. Over a 40-year span, she has either not worked at all or she has worked part time. Today she works full time.

My friend Gia is a speech pathologist who stayed home with her kids when they were babies and toddlers and taught dancing on the side. Today, Gia’s children are in school and she has launched a program called Learn with Moxie, designed to combat the negative effects of technology on our youth.

Finally, Dr. Laura Schlessinger, whom I consider a friend, had just one child (a bit later in life) who’s now in his thirties. But she stayed home with him when he was young, going so far as to jumpstart her career in radio by working from 10pm-1am when her son was asleep, and then switched to daytime hours once he was in school.

In other words, there is more than one way to sequence one’s life; but it can be done. And if “working part time or not at all” is what 67% of mothers say they want, they deserve to hear from those who’ve done just that. Here’s my advice for having genuine work-life balance:

So there you have it: the secret to a genuinely balanced life.

But don’t tell feminists your plans.

Human Nature Isn’t Toxic. People Are
Next Post:It’s the Collapse of the Family That Results in Father-Absent Homes