Maryann White: The Challenges of Being a 21st Century Catholic Mom 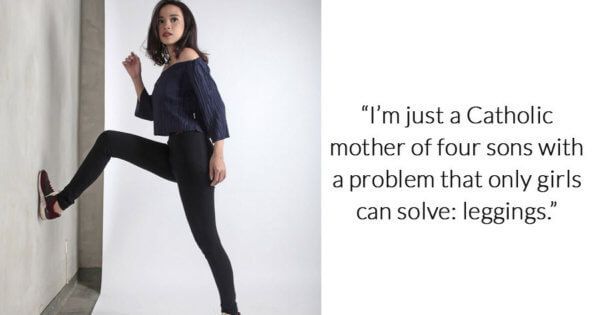 Remember the Notre Dame leggings controversy last month? If you missed it, I wrote about it here. Well, it turns out the mother of that editorial, Maryann White, wrote a response to the incredibly brutal and childish backlash she received and asked Notre Dame to publish it, and they wouldn’t. So she contacted me, and I told her I’d post her response. Here it is:

Imagine you came back to your room one day and found a note on your door from your neighbor. “I’m really sorry, but your music disturbs me. Could you consider the possibility of turning it down?”

Would your reaction be to crank up the volume? To go next door, berate and insult your neighbor for having challenged your right to play music (which their note didn’t do)? My leggings note in the Observer was received in such a spirit.

Aren’t we different here? I thought Notre Dame girls might care about the challenges of being a Catholic mother in the modern world. In the blink of an eye, it may be you trying to raise sons. Maybe you’ll be okay with the world swallowing whole your sons, Tinder-izing them, marinating them in alcohol, desensitizing them to objectified women and sex.

I’ve been trying to raise four sons into the kind of men you seek to marry. Like their father and grandfathers before them, they’ll be faithful not only after marriage but before they even meet their future wives. They’ll keep their promises, stick with you through thick and thin, be equal partners in parenting and heartwarmingly great dads.

These are the four young men the media recently insulted.

The kaleidoscopically disingenuous media response to my letter reads like a list of fallacies in a logic course, from ad hominem attacks on me and my sons to ad absurdum claims (that I called for a leggings ban). At worst, some deliberately mischaracterized my letter in order to serve the needs of their own clickbaitery. At best, they hadn’t even read it—they simply took up the claxon from the shrieker on the previous hill. The belligerently irrational tone of even once prominent media outlets was disappointing. So was the response of many Notre Dame girls.

Christians are willing to consider the needs of others, even putting those needs before their own. If you’re unable to lighten the burden of your neighbor, you let them know it with respect and regret, by simply continuing to do as you’ve always done. You may not turn down the music, but you don’t thumb your nose at your neighbor by turning it up.

The “leggings parade” as men referred to the Notre Dame “protest,” was a nose thumbing or bird flipping. In fact, it was worse. Had I in fact called for a ban, a protest might have been reasonable. But my letter was not a demand or a rant—it was a mild request.

I didn’t challenge your right to wear leggings. In fact, I said specifically that you have every right to wear them.  So the protest seemed to be about my right to challenge—my right to an unpopular opinion. You wanted to drown that out, or the media did, by labeling my letter with a blatantly false portrayal.

A defense of rape culture? Did I say my sons leaned forward and pinched the blackly naked rear ends and that I said, “Go for it guys; they asked for it!” For Pete’s sake. What I said was that I observed my sons NOT ogling the nakedness on display. What I should have said is how proud I am of them and of their respect for all women.

To claim your words can dissociate you from your sexuality is simply fatuous. You can’t just say, “I wear leggings because they’re comfortable, not because I look sexy. Keep your eyes off me.” Looking can be controlled. Seeing cannot. When one’s eyes rise from the hymnal to the altar, one may not look at the legging-ed rear ends en route, but one can’t help seeing.

Your words say, “You shouldn’t be looking,” but your leggings say “Check THIS out.”

Naturally you have the right to be sexual. I didn’t expect girls to simply stop wearing leggings after reading my letter, but I thought a few women might be open to exploring a gestalt shift. Such perception shifts are painful as you come to grips with a new face, a new reality. Yes, you have the right to leggings. But there’s a world of difference between your rights and What’s Right.

“The media have asked for my son’s response to all this. They agreed with me, although they didn’t expect my letter to change things. I hadn’t expected much myself—but I wanted to try to hold up a mirror, hoping to plant a seed that could, over time, encourage change.