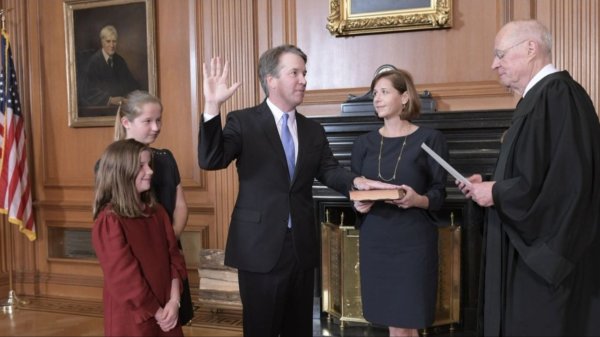 As some would tell it, Judge Brett Kavanaugh’s testimony before the Senate Judiciary Committee refuting allegations of sexual misconduct raises concerns over whether his temperament is fit for the highest court in the land.

The American Bar Association (ABA) has since reopened its evaluation of Kavanaugh due to his temperament. Richard Blumenthal even went so far as to call Kavanaugh’s testimony “self-pitying and arrogant.”

Makes you wonder how Blumenthal would react if he were accused of something he didn’t do. Would he cave under pressure from those who want to take him down? Or would he have the courage to call a spade a spade and shout his innocence from the rooftops?

Would he, in other words, be a man or a mouse?

Brett Kavanaugh demonstrated he’s no mouse. What I saw the day he testified, and what everyday people who have no ax to grind with Republican men saw, was a man defending his honor and good name, as well as the honor and good name of his family. In fact, Kavanaugh behaved precisely as I would expect any man to behave whose, as my friend DC McAllister wrote, “reputation, the peace of his family, hopes and dreams, career, security, individuality, humanity” have all been shot to hell in the name of politics.

He reacted like how I’d envision my husband reacting if such outlandish claims were made against him. As Susan Collins said about Kavanaugh’s testimony, “He is coming forth and answering an allegation that includes that he was involved in gang-raping and doping girls. I mean, that is so devastating, and I think he reacted with anger and anguish as a father of two young girls, a ten-year-old and a 13-year-old.”

If someone came along to accuse my husband of something he didn’t do, I would damn well expect to see his horns come out. In fact, I’d be disappointed if they didn’t. Most women want a man who will defend his territory. A man who caves isn’t a man worth having.

Real men (and for that matter, strong women) stand tall in the face of unfounded attacks; they don’t cower and apologize for something they didn’t do and walk away with their tail between their legs. They do what’s right, even when there’s a price to pay. They don’t cave to bullies.

To suggest that Kavanaugh lacks judicial temperament solely because he acted the way any man would react in such circumstances, particularly since there’s zero evidence that this is standard behavior for him, speak volumes.

“Judge Kavanaugh has received rave reviews for his 12-year track record as a judge, including for his judicial temperament,” Senator Collins said in her remarks last week. “The American Bar Association (ABA) gave him its highest possible rating.  Its Standing Committee on the Federal Judiciary conducted an extraordinarily thorough assessment, soliciting input from almost 500 people, including his judicial colleagues. The ABA concluded that “his integrity, judicial temperament, and professional competence met the highest standard.”

It also tells us the war on men—specifically, on white Republican men—is alive and well. As Matt Walsh recently tweeted:

“Actually, you’re the ringleader and mastermind of a roving mob of violent serial gang rapists.”

“OMG YOUR TEMPERAMENT IS TERRIBLE!”

Many men would cave under this kind of pressure. Look at Joel Kaplan, Facebook’s vice president for global public policy and longtime friend of Kavanaugh’s who came to the Senate hearing to show support for his friend. For this transgression, Kaplan faced blowback from his employer, so much so he ultimately caved. “I want to apologize,” he wrote in a note to staff. “I recognize this moment is a deeply painful one — internally and externally.”

Apologize for what? For making a personal decision to support his friend in his time of need? Pathetic. REAL MEN DON’T CAVE TO BULLIES.

That’s what made Kavanaugh’s testimony a breath of fresh air. He did what we as a country, and certainly what we as women, would want and expect any man to do in similar circumstances: stand up for himself and his family.

Seems to me that’s exactly the kind of man we’d want on the Supreme Court.

Is getting an education a waste of time for married women? Circa 1961
Next Post: What Happened to the Power of ‘No’