The Happiest Marriages Are Those That Are More Traditional in Nature 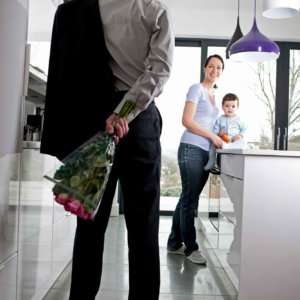 A similar version of this article was originally published at the Washington Examiner.

If you’re in a traditional(ish) marriage—that is, if you’re part of the majority of married women in America who are either not employed at all or who are employed part-time—you’ve hit the jackpot.

Countless modern marriages are struggling today or falling apart altogether due to the script they’ve been fed since the day they were born that a good marriage is a union of “equals,” or one in which both partners work full-time and year-round.

These marriages represent a mere 29% of married-family households (not quite the impression you have from those media messages, is it?), and many are not doing well.

That’s because viewing your spouse as your “equal,” as opposed to a partner of a different sex who has wildly different needs and behaviors, invites a boatload of unnecessary conflict.

This is especially true when it comes to sex. The research has been done: egalitarian couples, or couples with so-called equal marriages, are far more likely to have unsatisfactory sex lives.

“[Gender] continues to exert a strong influence over individual behaviors, including sexual frequency within marriage,” write the study’s authors.

It may be an uncomfortable pill to swallow, but there’s no getting around it: the happiest marriages, sexually and otherwise, are those that are more traditional in nature.

By “traditional,” I’m not referring to Ward and June Cleaver. I mean traditional by today’s standards. Yes, today most wives are employed in some capacity; and most husbands are hands-on dads. But in the vast majority of married-parent households, the husband still works full time and year-round while wife works part time, intermittently or not at all.

These families represent the new traditional family: there’s overlap, but the gendered structure is in place.

And here’s why that works from a sexual standpoint. When a wife knows she can count on her husband to provide and protect for her and the kids, her respect for him comes naturally. And respect is crucial for sexual attraction. A woman wants to feel as though she’s protected and provided for, whether or not she needs him to or not. It’s in her nature.

When the roles are reversed, the game changes—because it just isn’t natural for the woman to be the dominant partner.

No woman, deep down, wants to be in charge of her man. Every fiber of her being calls out for a man who’s stronger and smarter and more capable than she. And her need for this type of man is directly related to her desire for him.

This the theme of almost all great love stories and even Disney films such as Beauty and the Beast. The female protagonist longs to tame the male beast, or the dominant male, by channeling his lust and love in her direction. When she’s ultimately successful, the story ends.

Most women just aren’t attracted to men who are unproductive or even less productive than they are (unless the work the man does has some measure of cache or is something that garners inherent respect—such as a writer or a politician or a cop). When a woman feels stronger or richer or more capable than her man, her desire for him wanes.

The way to avoid this fate is to embrace gendered roles that allow their respective masculine and feminine natures to rise to the surface. What’s more, couples in these marriages don’t tend to keep score the way couples in so-called equal marriages do. Thus, they have fewer conflicts.

Women are simply drawn to masculine men, just as men are drawn to feminine women. The more you equalize the two, the more we become androgynous beings—which is where we’re headed—the worse the sex between them will be.

Bottom line? Traditional gender roles may not be trendy, but that doesn’t mean they don’t work. On the contrary, the evidence suggests it’s your best bet.

What If Your Negative Beliefs About Marriage Are the Problem?
Next Post: Of course leggings are sexually arousing. Duh.