Ep. 102: How a Culture of Casual Sex Made Men Less Manly (& Other Cultural Catastrophes):
Julie Mastrine 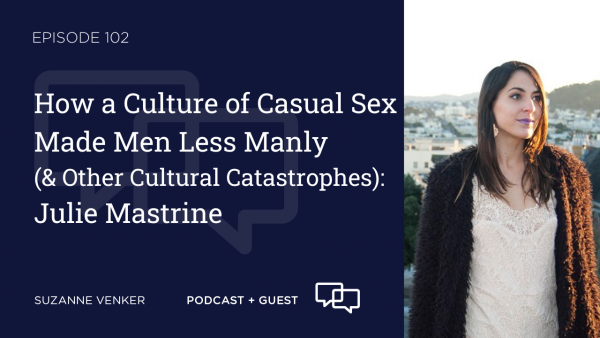 Julie Mastrine is a marketing and PR professional who’s passionate about being a responsible member of the media who elevates critical thinking and civil discourse.

She is the Director of Marketing at AllSides, a site that provides balanced news and media bias ratings.

Julie is also a frequent writer and editor who writes for Evie Magazine on topics such as politics, culture and relationships. Her work has also appeared in USA Today, The Federalist, and other publications.

I invited Julie on the show today to discuss a very astute article she wrote for Evie magazine entitled “Sexual Liberation May Be Making Men Less Masculine.”

6:00  The big lie of sexual liberation

9:00  Relationships need to be “defined” now because boundaries have been eroded

10:30  Fatherlessness also plays a role in the emasculation of men

11:45  Women used to be more choosy when it came to having sex with men

13:00  Men aren’t hardwired to commit to women they can sleep with easily

15:00  If women collectively changed their ways, men would rise to the occasion

18:00  Julie discusses her feminist background, her dating history, and what she learned living in big cities

28:00  Julie talks about her work with All Sides, which focuses on media bias ratings

30:00  Why the messages regarding love and courtship in romantic movies are wrong

35:00  Two people need to be aligned on the big things

45:30  The simple things in life are the most meaningful

Why Marry?
Ask Jordan Peterson
Next Post:Ep. 103: How (and Why) to Embrace Your Feminine Nature: Mrs. Midwest
Loading Comments...