Ep. 107: The Life-Changing Shift from Feminist to Feminine:
Thea Coburn 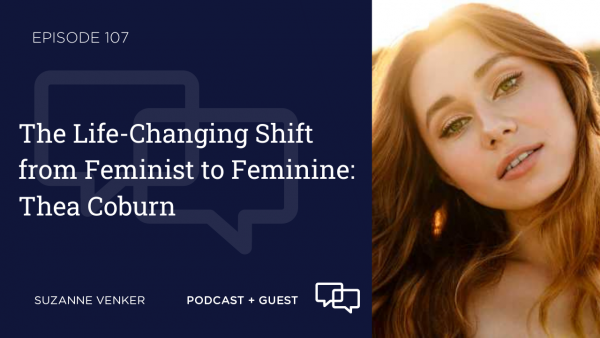 In her book, What Our Mothers Didn’t Tell Us, Danielle Crittenden writes this about feminism’s effect on American women: “It had seeped into their minds like intravenous saline into the arm of an unconscious patient. They were feminists without knowing it.”

I first read those words almost twenty years ago, and I’ve thought of them often over the years while observing the ongoing conversation about who’s a feminist and who’s not. Or about what feminism is and what feminism isn’t.

To hear women in the media tell it, feminism is simply the belief that women are equal to men and deserve the same rights as men. But that isn’t what is in practice—for if it were, the vast majority of America would be feminists.

In reality, a mere 18% of Americans identify with this label, according to a poll conducted by the research and communications firm PerryUndem. Yet in this same poll, 85% say they believe in “equality for women.”

If that isn’t proof of people’s confusion over feminism, I don’t know what it is.

Hear with me today to discuss the details of what feminism is and isn’t, as well as talk about her recent article at Evie magazine entitled “How I Went from Feminist to Feminine” is Thea Coburn, who writes for Evie magazine.

3:00  Suzanne and Thea discuss Dr. Jordan Peterson and his argument against legislation regarding gender pronouns

5:50  The teaching of feminism starts in public schools

9:50  Thea discusses the dramatic transformation away from the lies of feminism, including the “wage gap,” etc.

13:20  The truth behind feminism: Feminism rejects the natural law of polarity between the sexes in favor of sameness and allows you to point the figure outward and blame someone else or the system or the “patriarchy” when things go wrong

15:00  Feminism is framed in political terms but it really isn’t political—it’s personal

15:45  Feminist mentality is a victim mentality

16:40  If you approach life with a feminist mentality, you will hold yourself back

18:35  Women used to be exalted for their unique role as mothers

21:50  Thea talks about her generation and how they are revolting against the messages of feminism

25:00  Too much choice can be debilitating

29:15  Feminism is for an elite group of women. Most women want marriage and motherhood

32:15  Feminism disregards the struggles of men and boys

34:40 Men are a lot more forgiving than women

38:10  It is human nature for people to want to be around others who are like-minded

42:40  We live in a world where you now need two incomes. If you want to carve more of a traditional life, you really have to plan ahead

44:00  The “truth” behind traditional gender roles

47:00  Advice on dealing with people with opposing viewpoints

48:20  Women get sucked into feminism based on emotion

Previous Post: « Ep. 106: My Conversation with Stefan Molyneaux About Marriage & Family and the Meaning of Life
Next Post: Ep. 108: How to Be Classy: “Classically Abby” »
Loading Comments...