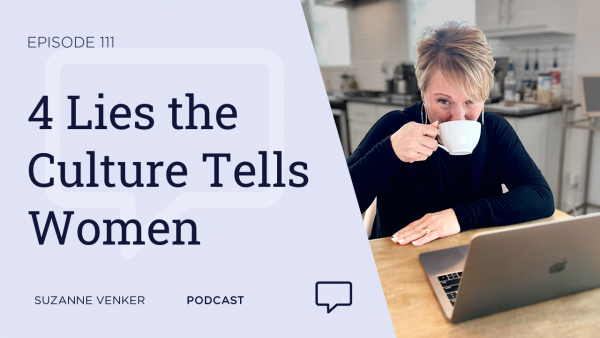 Suzanne discusses the fallout of the four lies our culture tells women, which represent Part One of Suzanne’s new book, How to Get Hitched (and Stay Hitched): A 12-Step Program for Marriage-Minded Women.

– Women should never depend on a man

– Career success will and should define them

1:50  The women who fell for these lies are now dealing with the fallout (They either can’t find a marriageable man or they do find one and are unable to have children the natural way or stay home with their children)

2:30  Feminists want women in the workforce so they can push their political agenda of government sponsored day care and paid leave. This is not what most women want!

3:10  The birth rate is the lowest it has been in a century

4:30  There’s so much more than money when it comes to mapping out a life that works

5:30  Follow the man’s career path because he is going to end up feeding the family, if only temporarily

6:00  Stop moving through the world like your body and life will be the same as a man’s

7:10  Put marriage and motherhood at the center of your life and build everything else around that

7:50  Marriage doesn’t change things as much as having a baby does

8:30  Women do not become more “eligible” with age

4 Lies the Culture Tells Women
Next Post:How to Be a Woman When You’ve Been Raised to Be the Man