Ep. 84: FOR MEN ONLY:
How to Navigate a Successful Marriage & a Meaningful Life:
E. Paul Allerton 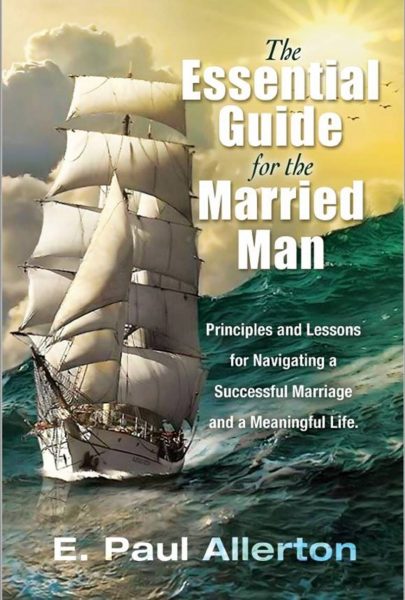 Believe it or not, many men today are just as interested in having a happy marriage as are women, and they’re actually great at becoming true partners in creating a great marriage.

But: they need guidance.

Too many men grew up in homes where a father was absent physically or emotionally. As a result, men often have faulty beliefs about what makes for a good marriage.

In The Essential Guide for The Married Man, E. Paul Allerton provides the kind of wisdom many men wish they had gotten from a loving and knowledgeable father or grandfather. At the end of the day, navigating a successful marriage and a meaningful life comes down to your ability to lead yourself and then your ability to lead your family based on your actions.

A man’s purpose determines the qualities of character he must develop. In order to serve his purpose, he must consciously choose and master the attitude and self-discipline necessary to navigate the storms of life.

Paul Allerton is Director of www.themarriedman.net, a site providing men with resources to be great husbands and fathers. Over the past 25 years, Paul has coached hundreds of men, restoring dozens of marriages to thriving and loving relationships. He has been married for more than 35 years and has six children.

6:50  Suzanne reads an email from a listener who wants her man to step up

9:25  60% of men grow up without fathers in the house or their fathers “go along to get along”

11:00  Paul talks about his own marriage of 37 years, raising six children, growing up in a broken home

15:00  Life is not about being happy; it’s about what you can give and contribute

16:10  Suzanne and Paul discuss the Boy Scouts and why it was so good for building strong men

21:00  Never use any one action or inaction as an excuse for your own shortcomings

23:00  A man’s career is not a privilege; it is their way to provide and protect. Women have lost the appreciation for that

23:45  After mastering your attitude and doing what they need to do, despite whether they want to.  Men also should have a daily discipline. Any muscle that you exercise will get stronger.

26:20  Purpose can be as simple as just wanting to provide and protect your family

27:40  Your relationship with money speaks to who you are

29:10  If you and your wife do not share the same views on money, your relationship will be mired in conflict

31:55  It is far too costly for a man to subordinate his career to his wife’s career

33:00  Children need mothers, and the more time they spend with their mothers the better

36:25  A woman’s job has little to do with the strength of her marriage

37:20  Raising good citizens is a bigger and much better role than making a corporation money

38:00  It is best if a man controls the finances and reigns in his family to live within their means

40:30  Women who are scared control their environment

43:30  Men care deeply and make huge sacrifices because they care

43:40  Worry about yourself and your wife to become soft. Focus on being disciplined, committed and generous.

45:40  Marriage and becoming a father are two powerful rites of passage and their is honor in fulfilling them

46:50  Paul discusses “nagging” and how when men defend themselves, it causes major conflict

51:00  Suzanne talks about her own marriage and how she and her husband are constantly learning

56:05  Men are chasing approval and affection when what they really want and need is the respect of other men