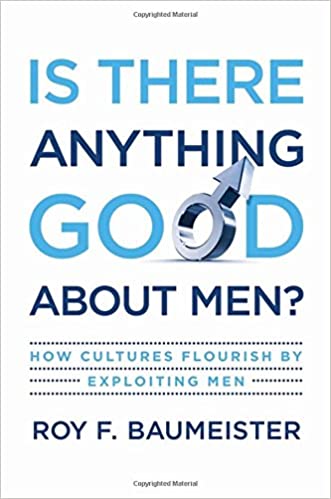 Roy Baumeister is a social psychologist who explores how we think about the self, and why we feel and act the way we do. He’s one of the world’s most prolific and influential psychologists who has published well over 500 scientific articles and more than 30 books. In 2013, he received the highest award given by the Association for Psychological Science, the William James Fellow award, in recognition of his lifetime achievements.

Roy’s 2010 book, Is There Anything Good About Men? offers provocative answers to questions such as: Have men really been engaged in a centuries-old conspiracy to exploit and oppress women? Have the essential differences between men and women really been erased? Have men now become unnecessary? Are they good for anything at all?

Ultimately, he argues that relations between men and women are now and have always been more cooperative than antagonistic, that men and women are different in basic ways, and that successful cultures capitalize on these differences to outperform rival cultures.

Still, he shows that while men have greatly benefited from the culture they have created, they have also suffered because of it.

5:00  Men and women  are not enemies of each other and have always worked together since the beginning of time

9:00  Men never “banded” together to oppress women. There is no evidence of this

12:00  “Inequality” emerged because of the psychological differences and strengths of men and women

13:50  Differences are rooted in trade-offs. You solve one problem and create another

14:30 Women are better than men at some things and vice versa. It’s implausible that evolution would make one gender “better” than the other.

15:40  Suzanne and Roy discuss the motivations and desires of men and women in regards to their abilities

17:15  The mean IQ of men and women is almost identical

17:50  Men and women are different when it comes to sex. Women cannot fathom the strength of the male sex drive

22:50  Women have a stronger desire to bear and raise children than men. The mother-child bond is universal, whereas the father child bond varies widely historically and culturally

24:30  Roy talks about his research of sex drives during the first five years of marriage

27:00  It’s much harder for women to know their own sexuality because it’s a moving target

29:50  The gender pay gap exists for a reason and it’s not because of discrimination or oppression on the whole; it has to do with the difference of desires between men and women when it comes to work

20:45  Men are more competitive by nature than women

Previous Post:Ep. 86: 7 Rules for Life & Love for a New Generation of Women
Next Post:Ep. 88: What’s Wrong with Being Woke: James Lindsay
Loading Comments...